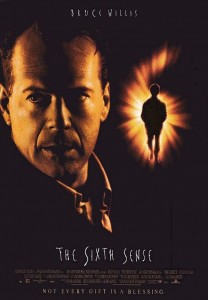 This week it’s a special edition of Reel Spoilers. Something we’re calling Reel Spoilers: Rewound. It was a light week for Hollywood. Yes, we know Best Man Holiday made $35 million this weekend. But four white guys sitting around talking about a film targeted towards African-American women sounded like a recipe for disaster.

Instead we decided to tackle a classic “spoiler-esque” film – The Sixth Sense. Can the film entertain even when you know the “the twist”? Does the film still work almost 15 years later? Or does the subsequent “Shyamalan oeuvre” taint what was once a beloved film?

So return with us now to those thrilling days of yesteryear when Bruce Willis still had hair and M. Night Shyamalan wasn’t a punchline.