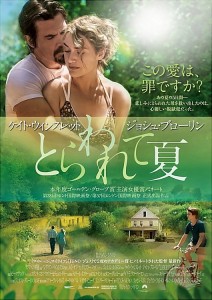 This movie poster makes about as much sense to us as the movie did.

This week Hollywood ushers in the month of February with Labor Day.

We don’t get it either (other than the chick-flick counter-programing to Super Bowl Weekend). Written and directed by Jason Reitman (Juno, Up in the Air) one would think they’d be in for a treat.

One would be wrong.

The results left all of us scratching our heads. So join us for some head-scratching conversation as we pick apart the film.

Member of the St. Louis Film Critics Association. Co-host of Reel Spoilers. Tom's writing career thus far has consisted of online film criticism for ReviewSTL.com, ToastedRav, and snappy Facebook status updates. Tom previously worked in radio, but is currently the Marketing Manager for The Family Arena in St. Charles. He can be heard reviewing films on KTRS with John Carney or online at TalkSTL.com with Thom West & Joe Dinero. He is also the host of a weekly film podcast called Reel Spoilers available on iTunes. More: clippings.me.
Dan Graney

Film Critic for Review St. Louis. Co-host of Reel Spoilers. Comic book reviewer and aficionado. "A hero is no braver than an ordinary man, but he is brave five minutes longer." - Ralph Waldo Emerson.